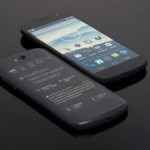 Russian mobile phone company Yota unveiled its YotaPhone dual screened Android smartphone at the Mobile World Congress 2014 in Barcelona. It has a quad core processor and second display on the back of the phone which should help the phone retain its battery which gives 58 to 68 hours of phone use for basic tasks. The phone is expected to cost $700. The first generation of YotaPhone is already on sale in Russia and four other European countries at a retail price of around €500.